4 years ago, Joan Chamorro was commissioned to assemble and lead an orchestra as a tribute to Miles Davis, coinciding with the 20th anniversary of his death.

Pere Pons, artistic director of the Jamboree Club and San Miguel Mas i Mas Festival was the one who made the assignment to Chamorro: he wanted it to accompany the publication of a special issue dedicated to the Missouri trumpeter’s imprint left in Catalonia.

Thus, besides the memories, anecdotes and words, all would revive in its most natural form, music.

The effort would result in a unique concert, on August 31, 2011 at the Apolo in Barcelona, that would be recorded and published together with the monograph.

Taking advantage of the enormous work that he had been doing with the Sant Andreu Jazz Band and Andrea Motis, Joan Chamorro decided to incorporate some of the young ones to form the Miles Tribut Big Band.

They would also count with great soloists as bassist Carles Benavent (the only one who had come to work with Miles Davis), guitarist Jordi Bonell, saxophonist Llibert Fortuny and trumpeter Matthew Simon. 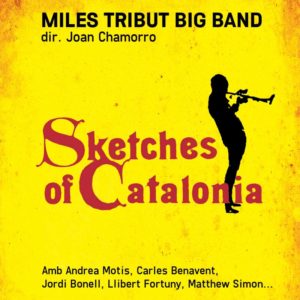 Selected themes reviewed the different stages of Miles Davis, and arrangements were ordered from Alfons Carrascosa and Sergi Verges, two masters of detail. The production received its name recalling the 1960′s Sketches of Spain by Miles Davis and Gil Evans.

The concert was a resounding success: musicians, critics and audience.

Today, four years later, the tribute has been celebrated again, this time at the Palau de la Musica Catalana and as the opening concert of 13 San Miguel Mas i Mas Festival.

And Joan Chamorro has decided to reissue this particular album and finally make it available to everyone.

This is how we can now enjoy it.

You can buy it here, on CD, or as a digital album on Bandcamp, where you can also listen to the whole album.