After recording six acclaimed albums with bassist Joan Chamorro, Barcelona-based trumpeter, singer and composer Andrea Motis makes her solo debut on Impulse! Records with Emotional Dance. The astonishing accord that she’s cultivated with Chamorro during the past seven years is firmly intact on Emotional Dance. The sterling performances features him as well as pianist Ignasi Terraza, drummer Esteve Pi, guitarist Josep Traver as the core ensemble. Like with Chamorro, Motis has recorded and toured consistently with these musicians.

Chamorro coproduced Emotional Dance with Brian Bacchus and Jay Newland. Through Bacchus and Universal Records’ A&R director Jean-Philippe Allard’s sage suggestion, Motis augmented the personnel with a handful of U.S.-based musicians – vibraphonist Warren Wolf, accordionist Gil Goldstein, baritone saxophonist Scott Robinson, percussionist Café Da Silva. Three tunes also features the famed American tenor saxophonist Joel Frahm, who’d worked with Motis and Chamorro before. “We invited [Joel] to play with us in Barcelona in 2016. He was so amazing that we knew we wanted him for this album,” Motis enthuses.

Even though, Motis is only 21-years-old, she displays a mature musicality beyond her years. That’s because she began playing the trumpet at age seven; three years later she began studying jazz at the Municipal School of Music of Sant Andreu under Chamorro, who soon after recruited her for his band while she was still a teenager. While at the school, she was also a member of the Sant Andreu Jazz Band for nine years with which she recorded eight discs and played with such acclaimed musicians as trombonist Wycliffe Gordon, saxophonist Jesse Davis, clarinetist Bobby Gordon, and saxophonist Dick Oatts, among others. In addition to trumpet, Motis plays alto saxophone. But it was with Chamorro’s band that she began singing. “The trumpet will always be my first instrument,” Motis says when asked if she likes being a singer or an instrumentalist the most. “Playing the trumpet is like mediating; it’s such a part of my life. But I never want to choose just one side of my artistic sides because I love doing them all.” 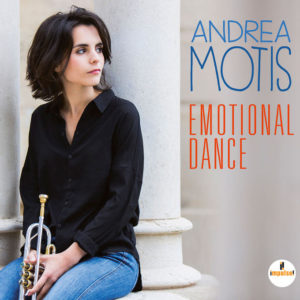 On Emotional Dance, Motis’ singing mostly takes center stage. She possesses an alluring, supple alto. With its subtle vibrato and her succinct phrasing, Motis’ singing has drawn comparisons to such stylists as Billie Holiday and Norah Jones. Her vocal prowess reveals itself immediately on Charles Daniels and Richard Whiting’s classic, “He’s Funny That Way,” which opens the disc. Perhaps, it’s no coincidence that the jazz standard has long been associated with Lady Day; Motis and her ensemble certainly do the composition justice by underscoring it with a quintessential swing-era shuffle that paves the way for an absorbing solo from Robinson. Motis follows his lead by blowing a delightful trumpet solo that accentuates her citrus tone and her assured sense of melodic swing.

Motis sees Emotional Dance as an extension and evolution of her work with Chamorro. Like their previous efforts, the new album contains it fair share of jazz standards. In addition to “He’s Funny That Way,” Motis delivers captivating renditions of Franck Loesser’s “Never Will I Marry,” Cole Porter’s “You’d Be So Nice To Come Home To,” Eddie Jefferson’s “Baby Girl,” Johnny Mercer’s “I Remember You,” Horace Silver’s “Señor Blues,” and Antonio Carlos Jobim and Vinicius De Moraes’ “Chega de Saudade.”

Emotional Dance reveals some of Motis’ artistic growth with the presence of Frederico Sires Puig’s “La Gavina,” Els Amics de les Arts’ “Louisiana O Els Camps De Cotó,” and Perico Sambeat’s “Matlida.” On all three tunes Motis sings in Catalan – a first for her on disc. The latter tune even features Sambeat on a billowing soprano saxophone accompaniment and solo.

Also for the first time, Motis exhibits her gifts as composer. She penned three of Emotional Dance’s songs. The first song she composed for the disc was “If You Give More Than You Can,” a poignant ballad containing heartfelt lyrics about being overwhelmed with multiple responsibilities. Her ebullient, “I Didn’t Tell Them Why” shows Motis’ friskier side as she sings about keeping a blossoming romance on the down low, while her swaggering hard-bop instrumental, “Save the Orangutan” best illustrates her command and improvisation heft on the trumpet as she shares the frontline with Frahm.

As for the sparkling title track, Terraza wrote it several years ago as an instrumental. Motis wasn’t even aware of Terraza’s compositional abilities until she heard the song on the radio. “We thought that the title of that song was very representative of the feeling that we had during the making of this first album for Impulse! Records,” Motis says. “The title conveys all the positive changes and new directions we’ve taken with my music while acknowledging that things are moving forward in the right direction.”